(Fear not, traveler. This post contains no Westworld spoilers.)

If you geek out over Old World Westerns, future tech sci-fi, or the delicacies of wardrobe, set design, and screenwriting, you need to be watching Westworld. The new HBO darling has garnered high praise from critic and viewer alike, and as the series reaches the half-way turn of Season 1 at the time of writing, there’s no excuse not to hop on the bandwagon.

Westworld is not an HBO “original.” It began as a 1973 thriller film, written and directed by Michael Crichton (ER, Jurassic Park, countless other works of note). HBO has already considerably altered the source material, so debating the merits of one story vs. the other is fruitless. Rather, let’s take a deeper look into the franchise’s branding, and how it has both evolved and stayed the same in 33 years.

The titular Westworld is a sophisticated theme park set in the lawless American frontier. Advanced androids roam the artificial world and serve as playthings for the park’s high-paying clientele. Below the surface, the mysterious Delos Corporation constructs, programs, and maintains the robot “hosts,” while keeping a watchful eye on their guests.

A bit more intricate than a romantic comedy, the posters and branding had to convey a whole slew of information in a very short window. The 1973 film poster did its damndest to hit every note. The Westworld typeface is certainly era-appropriate: it could adorn ’70s-everything, from sliced bread to a roller disco. The second line is cheeky in a way I wasn’t expecting. Playing with type in this manner is as obvious as slapping a “(SARCASM)” sticker on the end of the line. I think it undercuts the visuals above, which have a sober flow and dynamism to them.

The bullet-riddled bandito with a cleaved cybernetic bandana is a marvelous hero image. On either side of his belt buckle: the Delos Corporation eggheads, observing their park fall into chaos, and the dashingly-dressed protagonists about to unwittingly stumble into this dangerous world. The orange outline and brown backdrop are distinctly Western in tone, and the sunrays beneath the wordmark help continue to drive the theming. It’s a bit of a hodgepodge, but the Western + sci-fi elements are all clearly accounted for. 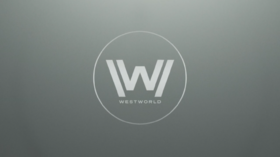 2016’s incarnation of Westworld is far less assuming. Absent are the gunslingers, sunsets, and painted arroyo color scheme. Chrome and black dominate, making the entire world feel minimally futurist in a way the 1973 version did not. (To be fair to the time period, future tech used to be illustrated by hulking stacks of processors, whereas today’s future tech takes the form of microchips and ominous glass structures.) The intro is especially beautiful, yet reveals almost nothing about the park, its inhabitants, the company behind the scenes, the protagonists, or really anything.

What’s similar between Westworld 1973 and Westworld 2016? The use of androids is prevalent in both iterations, although their form has mightily morphed; you’ll never see exposed cybernetics in today’s Westworld (Thanks, Terminator). Similarly, the use of cryptic messages has endured. Whereas the original film poster slapped you upside the head while telling you bad things were afoot, the HBO series is a bit more subtle. Read through their website and marvel at both the smooth-scrolling interface and expertly-crafted copy directed at future visitors. Oh, and once you’ve reached the bottom, press and hold Shift…

Differences are aplenty between the original 1973 film and the new 2016 series, but I think we can largely chalk them up to a changing of the times. The spirit of Westworld is alive. Well, maybe not a spirit, perhaps it’s more of a ghost in the machine…